How to Breathe some Life into your Facebook Posts

How engaging are your Facebook posts? Are you getting the kind of attention and interaction you were looking for? Here are three solid dos and don’ts when it comes to posting content on Facebook.

Use Photos and Media as Much as Possible
We’ve said it before, but it’s just so important: use photos and videos as much as possible.  The latest stats from Facebook show that text posts are getting less and less engagement than ever before. Text posts are useful for quick updates or linking to news articles, but photo posts will generally attract more attention from your followers.

Actively engage your fans
If you want people to talk to you, you need to talk to them first. The next time you link to an article or blog post, ask your followers a question. Take the initiative and engage them and they’ll be much more likely to pay some attention to you. It takes a couple of seconds to write out a question, but it could boost your engagement more than you’d think!

And here are some things to actively AVOID. 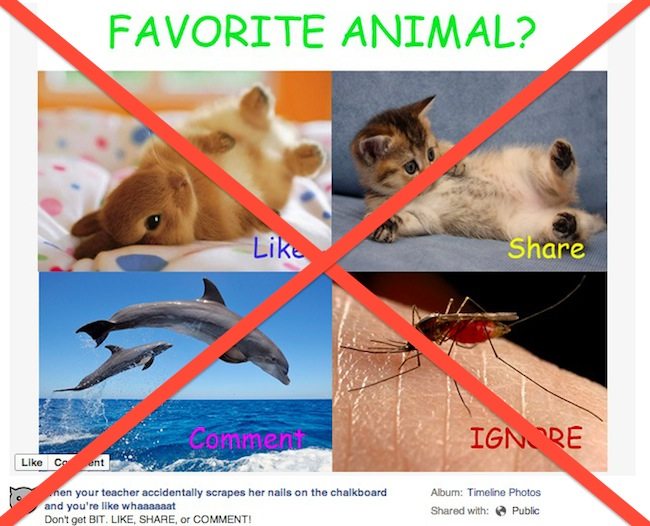 There’s nothing worse than seeing one of these images flash up on your news feed. “Content” like this dilutes your brand, makes you look unprofessional, and drives away real followers. The only people that would actually like or share these types of posts are probably not your optimal target market.

Hashtag Stuffing
It’s obnoxious on Twitter and even more obnoxious on Facebook: #companies #that  #hashtag #every #single #word. It’s important to use hashtags every now and then, but there’s no point using more than two. Try to focus on some key points and search them up beforehand to make sure they’re relatively popular.

Finally, here’s one last tip from us (because we love you so much):

Improve your posts by measuring your metrics
To know what to post, take a look at what types of posts were popular in the past. It’s simple enough to look at the number of likes, comments, and shares, but you should take it a step further and use customized URLs to track your progress. Bitly is a good example. You can use Bitly links to keep track of everyone who clicks on your links. This can give you a rather good idea of which news articles or content is particularly popular among your followers.