Sorry Shakespeare, but we’re going to borrow from one of your more famous soliloquies:

Whether ’tis nobler of the brand to suffer

The Slings and Arrows of event mention

Or to take Arms against the Sea of hate-tweets

Wednesday’s 12th anniversary of 9/11 prompted many brands to mark the occasion with tweets. Some went over well, others were questioned for their need and one was tried and convicted within the court of public opinion for serious lack of judgement.

Brands like American Express and General Motors posted simple messages of remembrance and to thank those in the military: 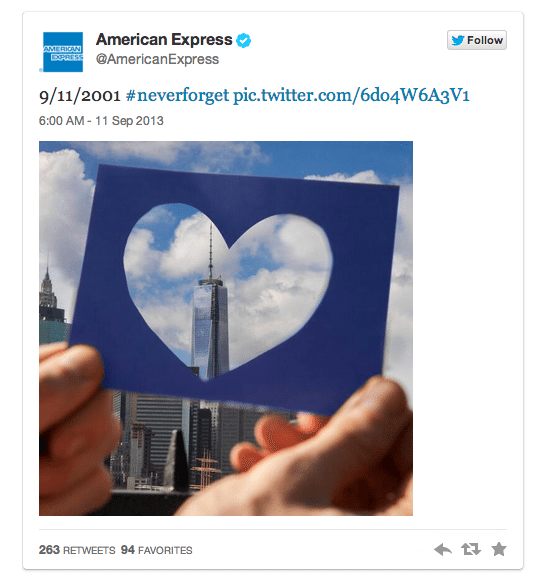 The TV show Blue Bloods rode the line of self-promotion: 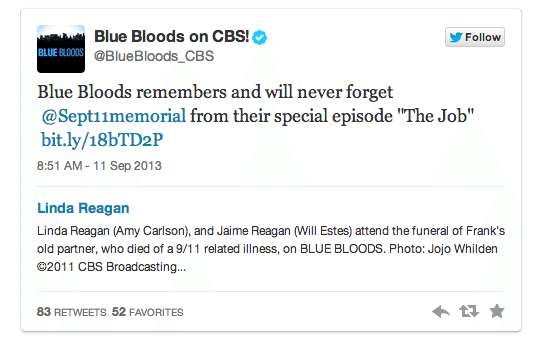 And then there was AT&T: 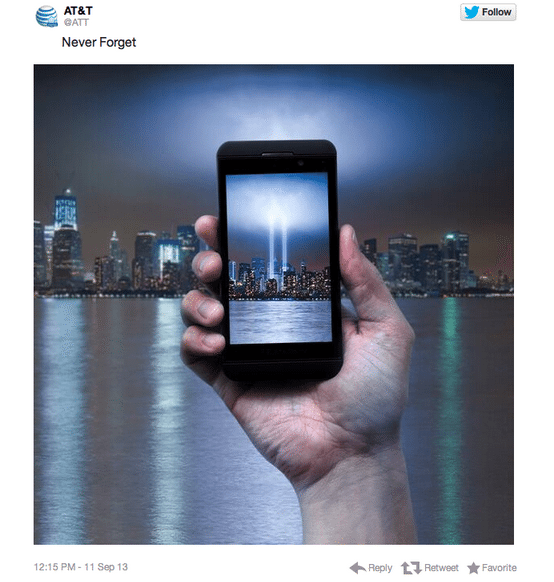 The post was quickly seen by followers as using a tragic event to sell mobile devices. AT&T removed the post and apologized. (On the flip side, there is thought that AT&T was recreating a more modern version of this Village Voice cover.)

It’s not just the anniversary of 9/11 that brands need to be cautious with though. There is the potential to offend consumers with posts relating to any sensitive anniversary or tragic event. Epicurious’ “recipes for Boston” comes to mind.

Some would say nothing. Be sensitive to what you tweet, but do not reference the day in any fashion.

Some would say something. A simple “Today, we remember” is classy, respectful and shouldn’t get a brand into the proverbial hot water. For many brands, especially those based in America, it would seem appropriate to reference the day. Most likely, followers would notice if mention wasn’t made, and that in itself could be deemed offensive.

If there is a public outcry, the apology needs to be swift and it needs to be genuine. The apology under absolutely no circumstances should say the following:

This was in response to a glitch with Esquire’s online edition, where a photo of a man falling from one of the Twin Towers was posted next to a story regarding the morning commute.

Glitches happen. Mistakes happen. Angry responses happen. Social Media Rule #1 is: Never lose your cool. To brush off a major glitch with a “relax, everybody” and calling it “stupid” only adds more insult to injury.

To post or not to post ultimately is up to the brand. How to post and how to react to responses needs to built into brands’ social media guidelines. Having those guidelines in place will save a lot of time, frustration and most importantly, consumer confidence in said brand.