Are your Tweets Damaging your Business?

Like it or not, your business is greatly influenced by social media. To succeed online, your business must be credible and provide value to followers through every single tweet. Poorly-thought out tweets can slowly erode a company’s online reputation. Here are three things NOT to do when running a corporate Twitter account. 1. Don’t shove your brand down people’s throats

Unfortunately, businesses often forget what’s really important: building relationships with followers. One big obstacle for many businesses is that they still treat Twitter as an advertising medium. These companies love talking nonstop about their newest product or promotion. This is a mistake. Social media isn’t the same as a television commercial or a newspaper advertisement. If your followers realize you aren’t providing any value for them, they’ll unfollow you.

Twitter (and social media in general) has connected businesses and consumers like never before. As a result, people will bring their concerns and complaints to your Twitter feed. It is so important to respect the followers who made the complaints. Even though it’s through Twitter, these are real customers who have run into real problems with your company, so show them you care about them. Unfortunately many companies just take the easy way out and: a) Ignore the complaint b) Tell the customer there’s nothing they can do for them, or c) Get into an argument with the customer. As a result, unhappy customers will spread negative word of mouth about you. Always try to get customer concerns resolved as soon as possible to leave your customers satisfied.

Most corporate Twitter accounts are under the control of just one employee. While there’s nothing wrong with that, it is important to have some form of quality control on any outgoing tweets. 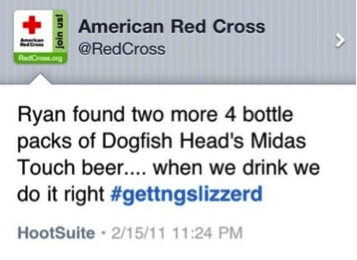 Above is an example of an honest mistake made by someone from the American Red Cross who probably tweeted something meant for a personal account. As expected, this resulted in a PR disaster for the Red Cross. Don’t let this happen to you! If you’re in charge of social media, make sure you’re tweeting from the right account. If you’re in a senior position, keep an eye on your company’s Twitter feed to make sure everything is acceptable. Need more guidance? Our expert team at Curve can help your business grow your social media presence! For more helpful advice, send me an email at justin@curvecommunications.com.